Could have been a PIE

It was supposed to be a pie.

That was the plan anyway. So I started with the carrots, potatoes, celery…

Ah yes, now I remember. I bought some celery because I was feeling guilty that I had not been eating enough green lately.

Then I thought a pie would be a safe bet even if the boys weren’t terribly excited about celery.

Softened the veggies in a pot of hot water. Then in a separate pot, threw in a blob of butter and tossed a cubed big onion till it got nicely caramelised.

I happened to have a pot of chicken soup on the stove anyway so that came in handy as stock which was added to the onions.

Next thing you know, it was too late to be making pie for dinner anyway as I would have needed at least another hour if you count the baking time. So now, I’ve got pie stuffing and I wasn’t going to be making pie.

At this point, it’s looking pretty much like a stew or a casserole, depending on how things were gonna roll.

This is where a can of mushroom soup, some milk, button mushrooms, tuna and macaroni, all thrown into the mix, come in handy.

I was hell bent on a one pot dish for dinner as I wasn’t going to cook anything else.

Everyone loved it so the pie that didn’t happen worked out pretty fine after all.

Searching is in progress

Searching is in progress

Kam Eat With Me

Kam Eat With Me

kam.eatwithme
•
Follow
Quick review: a throwback to a birthday celebration when we had a cross section of dishes, from rice to spicy edamame, and tempura to yakitori. Food was decent and enjoyable, good taste, and the ambience, buzzing like the crowded diners in Tokyo, capturing small elements down to the decor such as the wooden stall dividers. Prices are not much, but it can all add up when you have a bit of this and that, especially the skewers. Not something I would go for on a regular basis as I find it too noisy for my liking but izakaya resto tend to attract a younger crowd, no?
View on Instagram |
1/9

kam.eatwithme
•
Follow
Quick review: popped by this few days' old cafe and quite taken up by the space. At the moment, besides coffee and cakes, food is limited as they don't have a hot kitchen. But I do so love the breathing space... Don't you?
View on Instagram |
2/9

kam.eatwithme
•
Follow
Yo people!!!  Tiger Street Food Virtual Festival is back with an epic collision between streetwear and street food, with even more street food choices and new exciting features! The mash up brings the two together to create an extraordinary experience for fans, while breaking the boundaries of street food. Tiger has partnered with renowned local streetwear brands EK Collective, TNT Co, The Swagger Salon, Eversince, Pestle & Mortar, and Dissyco. One of the streetwear merchandise is included in the Hypefeast Drop, which comes with the street food dish that inspired the exclusive apparel, as well as a Tiger Beer and a Tiger Crystal. Limited quantity is available on a first come first served basis. The virtual Hype Store showcases one brand each week for purchase as well as other limited-edition merchandise. Over 100 street food vendors serving both classic and innovative dishes are found in the festival, all great with ice-cold Tiger Beer and Tiger Crystal which will be delivered to your doorstep. Those in KL, Selangor, Penang, Ipoh, and JB can enjoy street food, delivered within 10km radius from the vendors. Tiger Street Food Virtual Festival is on every Thursday, Friday, Saturday and Sunday for 6 weeks from 11am until 9pm till Dec 19. Fans can also earn Tiger Coins to redeem vouchers for beer and merchandise. Sign up at www.tigerstreetfood.my, and earn one free can of Tiger Crystal, while stocks last. For more deets, visit www.kameatwithme.com For non-Muslims aged 21 and above only.
View on Instagram |
3/9

kam.eatwithme
•
Follow
Quick review: Formerly a post office, Kafei Dian is housed in building with a mock Tudor facade, sprawled over a large cemented floor area and decked out like a Kopitiam from the 1970s, perhaps even older, with old school tables and chairs, complete  with wall hangings and decor from that era. Food is simple and basic, much like what you would expect from a coffeeshop, at very reasonable prices, especially when you consider how Petaling Street is slowly being gentrified. No wonder it's usually packed as it's probably one of the cheapest places to grab a meal in town. 1. Nasi Lemak - sambal had good flavour and  sotong sambal decent. 2.Hainanese Chicken Chop - Generous portion, though sauce was not really Hainanese style. 3. One of the better bets here, Ginger stewed duck rice was good, the ginger and spices apparent in the flavourful gravy. 4. Sweet sour chicken rice - friend didn't like this as he said rice wasn't piping hot and meat pieces were OK OK only. 5. Chee cheong fun in sweet sauce - avoid this - so darn sweet, not much else going for it. 6. Yam cake (wu tau ko) - said to be the day's special, quite tasty though more yam inside would have been good. Portion quite small. 7. Coffee was ordinary, so long as you're not expecting Ipoh white coffee standard, all's good. Prices averaged about RM11 to RM15 for most dishes/ RM5 for starters. Keeping it real, nothing fancy smancy, Kafei Dian is a good place for a bite and chill from the crowd that's spilling over from Petaling Street.
View on Instagram |
4/9

kam.eatwithme
•
Follow
Quick review: stopped by Kaffe 16 for some refuge from the sun after an educational walk around Petaling Street with @klhwalks a couple of weekends ago. As you enter, the seating out front looks pretty simple, but the cafe goes on quite a length inside and as you progress, there are cozy seats at the air well and upstairs, with pretty Insta-worthy spaces. The back part connects with Beryls, the chocolate shop next door. Run by the same owners, it's no wonder Kaffe 16 has chocolate as its signature offering. It's big on Chocolate, but we needed our caffeine shots so we opted for the Chocolate truffle slice to go with coffee instead. Was pleasantly surprised at the rich quality chocolate. Definitely recommend this. Didn't get a chance to try the mains but the menu shows plenty of pasta options as well as rice such as Chicken Kasu Don and Japanese Curry Rice.
View on Instagram |
5/9

kam.eatwithme
•
Follow
With a name like Snout, no prizes for guessing what’s the mainstay of this resto. The place is brightly lit and spacious with piggies on the stools and walls, reaffirming the restaurant’s theme, while potted plants and stacks of books add to the casual homely ambience. Starters was Scotch egg-style Fried Quail Eggs - ensconced in minced meat and an assortment of other condiments, covered with breadcrumbs and deep-fried - so scrumptious and nicer than some of the ones I tried in UK which were dense and cold. Boasting all things porkalicious in the menu, the signature juicy T-bone Pork Chop (RM33) comes with a big swirl of classic egg carbonara. Littered with bacon bits and Parmesan cheese on top, this signature chop had No. 1 smacking his lips and ooh-ing his approval. Another bestseller here is the comforting Braised Pork Belly (RM23) with steamed rice. The jiggly pieces of pork belly with layers of lubricious fat, braised for hours in soya sauce and spices, was melt-in-the-mouth tender and bursting with flavour. Comes with an egg, bok choy, braised peanuts, and my favourite, a dallop of sambal. We also had the Sticky Pork Rib Rice (RM23) - tender, ribs coated with finger-licking sweet sauce that was nicely balanced, the kind that slowly teases your palate to give you a satisfying mouthfeel rather than hit you up with a shot of diabetes.   No. 2 had the Snout Avenue Sandwich (RM18) - a piece of grilled pork tenderloin topped with caramelized onion and sandwiched in a bun. Looked simple at first glance, but the taste won us over with the still moist and flavourful texture of the pork and fresh veggies. In comparison to the other outstanding dishes, the Salted yolk carbonara (RM23) with salted egg, bacon bits and Parmesan cheese seemed the most ordinary, though it held its own well in terms of flavour and tastiness. Good food and decent prices, certainly a winning formula to get you going back for more pig-out sessions. More deets on www.kameatwithme.com
View on Instagram |
6/9 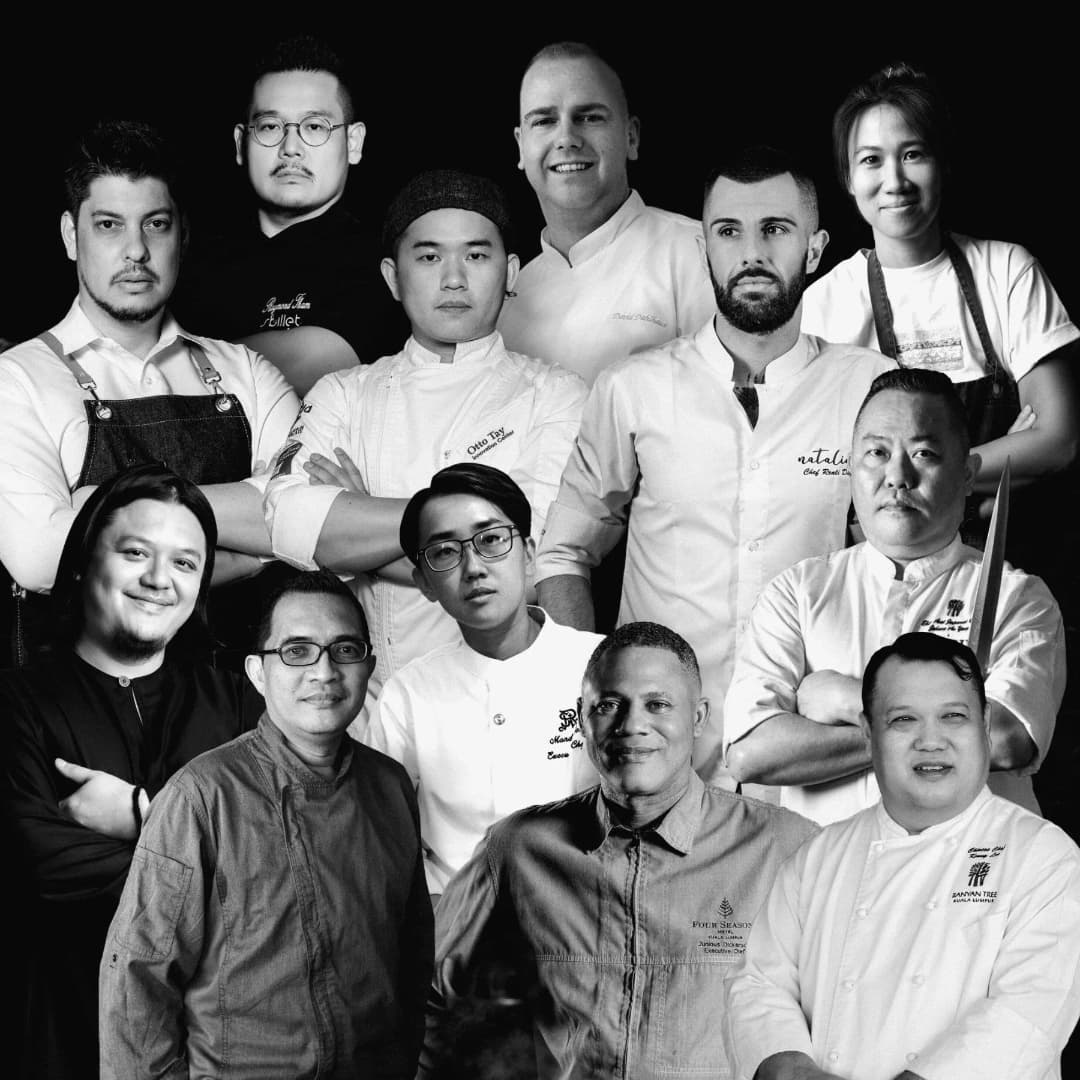 kam.eatwithme
•
Follow
12 celebrated chefs in Malaysia will be showcasing their culinary wizardry this November in Tatler Dining's pop-up food and drink festival called Off Menu. Like its name suggests, this unique dining experience will feature a one-of-a-kind crossover menu with dishes crafted specifically for the event. You won't be able to taste them anywhere else but here, not even at the respective chefs' establishments. Already a great success in Hong Kong and Taiwan, Off Menu will make its highly anticipated debut in Malaysia at our venue partner Pavilion Hotel Kuala Lumpur on November 13 and 14, 2021. The chefs are: *David Dahlhaus of Ambara, One&Only Desaru Coast *Diego Reali of Natalina Italian Kitchen *Jeff Ramsey of Japas by Jeff Ramsey *Junious Dickerson of Curate, Four Seasons Hotel Kuala Lumpur *Kenny Lee of Jade Pavilion, Pavilion Hotel Kuala Lumpur *Mandy Goh of Kayuputi, The St. Regis Langkawi Otto Tay, world pastry champion *Raymond Tham of Skillet at 163 and Beta KL Chai Chun Boon of Copper *Johnny Au Yong of Ebisu at Altitude, Banyan Tree Kuala Lumpur *Azli Ahmad of OpenHouse KLCC *Jun Wong of Kikubari Off Menu Kuala Lumpur is strictly by reservations only. email myinfo@tatlerasia.com. For more deets, visit Off Menu Kuala Lumpur's official website.
View on Instagram |
7/9

kam.eatwithme
•
Follow
Quick review: Tucked along a row of old shophouses just off Petaling Street, Malaya Garden attracts long queues of enthusiastic diners who are probably there for the Gram as much as the food. You can't miss the cake counter with tapirs, elephants and tigers to keep you company. A gold spiral staircase leads you, not up to the giant's home on Jack's beanstalk, but the dining area upstairs where you see more green. The mezzanine room and rooftop are super cozy and so pretty. The garden is in full bloom here as plants, real or otherwise, decorate most spaces. The cafe has put a lot of effort into the aesthetics and it shows. Interesting fact: where Malaya Garden is used to be just a backlane. We tried the signature Nasi Lemak Malaya which was pretty impressive. The sambal was a good balance of sweet, spicy and salty, and the Rempah fried chicken was Huge! Came with lekor, bits of fish, an egg and the usual condiments. I had the Nasi Lemak Raksasa which had everything like the Malaya version, plus sotong sambal and beef on skewers and sambal ijo. Two people can share this as portions are generous. Definitely would come back to eat this again. My friend had Tomato Soup and while it was tasty, it wasn't what she expected as it reminded her of pasta sauce. There's a good variety of pasta given a local touch such as salted egg cream linguini, curry laksa pasta and sambal pasta ayam. The Pandan Coconut Swiss Roll, which had a grated coconut in gula Melaka and cream centre, was so delicious that I ordered a roll to take back for the piranhas. The only drawback about this cafe is that it's very popular so I'd feel bad lingering too long taking up a table, otherwise it's a great place to spend an afternoon.
View on Instagram |
8/9